African Fountain is the approach based on long experience to deliver water services to large rural and semi-urban communities through social business models and strong local empowerment.

Fontes GmbH Switzerland is providing water services where needed at the right quality, quantity and price. The plan is to take over, extend and operate existing schemes through local partners. The aim is to reach tens of thousands of people, including those at the base of the economic pyramid. The first applications will focus on extension and improvement of Fontesâ€™ water services in Goma, North Kivu. New communities already request our services also in South Kivu. In addition, Fontes is supporting the establishment of sustainable water services in Ghana through a cooperation with Ghana Red Cross.

The aim of Fontes Switzerland - African Fountain is to establish a structure and business model to scale up access to safe water in various African countries with full cost recovery, while also reaching people at the base of the economic pyramid. This will include establishing and improving five key elements:

For 2017: Through the effort of our local partner Yme Jibu in Goma, an additional 25,000 to 30,000 persons will get access to water services. The monitoring system is developed and implemented. Cash handling and customer payment schemes are developed and related improvements implemented.

For 2018: Hopefully, when political situation and local conditions allow, additional 100,000 persons will get water services towards the end of the year.

For 2019: By end of year, in total about 62'000 people reached both in Mugunga - Lac Vert and adjacent areas. Financially, above break even, all "profits" used to extend network to reach additional people at the fringes of Goma Town based on concrete requests by local Authorities. 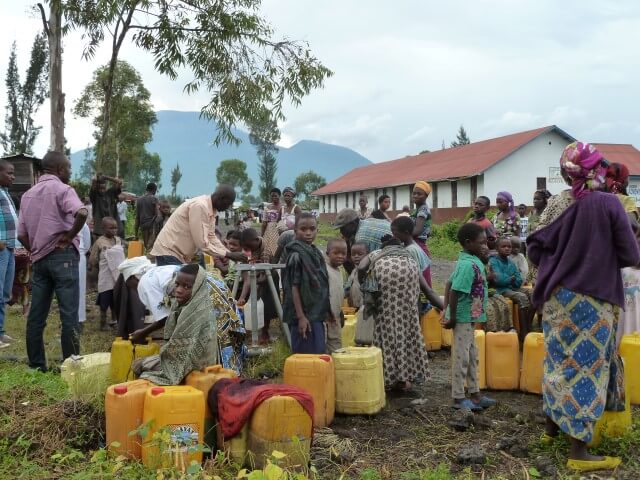 Water service delivery at one of the tap stands

In the community of Mugunga â€“ Lac Vert (Goma, North Kivu, DR Congo; population of ca. 48'000) about 42,000 persons already receive continuous water services at 36 tap stations and about 240 private house connections. Enormous efforts and work has beenÂ  invested by Yme Jibu Ltd to put management structures in place. Yme Jibu is a local private company registered in 2017 (Fontes keeps 50% of the shares). Yme Jibu established cash flow solutions since June 2016. Income has, however, become highly reduced due to significant exchange rate changes. In March 2018, with the support of the Government, Yme Jibu was able to double water prices to roughly about USD 0.06 per jerry can of 20 litres. So far Fontes Invest Norway and Fontes GmbH Switzerland invested about US$ 75,000 in direct project support. Extensions are being constructed to reach another 30,000 persons. A monitoring system is in place collecting daily data on water sales and income.

Continuous water service provision has been running since June 2016. Since June 2017 Yme Jibu Ltd managed to increase water sales reaching 10 to 12'000 m3 per month. Since the contract with Swiss Bluetec Bridge was signed, Yme Jibu managed to increase revenues to ca. USD 310'000 in 2019. This covers the operation and small maintenance, operational break-even has been reached but as a social enterprise profit has been used for extensions and new tap stations. Pay-back of investments has just started slowly and irregularly during last months. Also, a huge effort has been invested during last months in negotiating for new project areas, from which concrete requests have been formulated by communities and authorities. However, political and security instability has slowed down the process of starting up activities at new locations.

To approach new communities with the same water service, negotiations have been held with MyClimate.org to pre-finance part of the investments, while covering the investments and additional costs mainly for training and management support through Carbon Credits. Due to Covid-19, the signature of a contract is delayed to later in 2020.

In addition, although huge efforts have been made by Fontes over last 5 years to introduce for the staff a mindset with business principles in focus, the project staff still struggles with using the learning and established routines in properly managing resources and needs based on recovered revenues. Although Yme Jibu is increasing its portfolio and is effectively delivering water services, cooperation between Fontes and the leadership of Yme Jibu is still challenging in terms of different views on business management.

Fontes GmbH Switzerland is a private company with shareholders. Its mission is to mobilize funding through investments from private people in Switzerland. It will make such investments available to the DRC activities through loans. In addition, Fontes Switzerland provides consultancy services in management as well as in technical solutions. It is also working on finding modern and innovative solutions to empower local partners. Fontes GmbH Switzerland is an off-spring of the Norwegian Fontes AS and Fontes Invest AS.